It seems like every year we hear about new eco friendly milk alternatives. One year it’s coconut milk, the next hemp. The number of options are catching up to the choices in the cereal aisle.

While some people switch to nondairy milk to soothe tummy troubles, many are looking for a more sustainable alternative. In this new reality of ever-expanding milk and milk alternative aisle, it’s easy to get confused about which non dairy products are best for the earth.

In 2018, researchers from University of Oxford conducted a study showing that a glass of cow’s milk creates almost three times the amount of greenhouse gas emissions of any plant-based alternative. Cow’s milk also used nine times as much land for feeding and pasturing as planet-based products did to grow. To get to a glass of milk, you have to combine the impact of their pasture, all the land and energy used to grow the cow’s food, the water ingested by the cow, and yes, the cow’s burps (this part is much scarier than it sounds, google “cow burp methane” and be amazed). 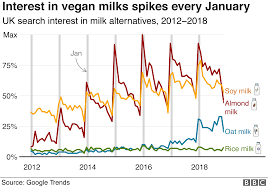 So, now that we know dairy is definitely out, let’s get down to it. What are the best eco friendly milk alternatives?

Okay, we’re going to make some enemies here, but you should really try to avoid almond milk. The creamy texture and sweet characteristics of the milk make it the most popular dairy alternative in America, but there’s obviously more than taste and texture to consider.

If you’re in America, your almond milk doesn’t have to travel internationally to get to your grocery store, because 80% of all the almonds in the world are grown in California. BUT, you may have heard about the water issue. One study found that the average California almond has a water footprint of 3.2 gallons. One teeny, tiny almond. Add to that the increasingly serious and frequent droughts occurring on the west coast, as well as transportation emissions.  With 80% of the world’s almonds coming from California, almonds have to travel far and wide to get to consumers.

In other areas, including land usage, almonds are similar to other plant-based milk. But with a resource as scarce as water, it’s best to ignore the call of almond milk.

Oat milk has one of the closest consistencies to regular old 2% dairy milk. While it’s hard to find a version without sugar, when you do, the taste is lighter and earthier than milk. Oat milk also retains some nutrients. For instance, the heart-healthy fibers are soluble in water meaning they’re passed on to your morning latte.

Oats are also great on the environmental front. Almonds require six times as much water to grow a cup as oats, and they’re also easier on the soil and produce about the same emissions as other plant-based milk alternatives.

When looking for oat milk though, be sure to buy organic. Some farmers use pesticides for their crops, and historically the pesticide-added glyphosate has seeped into oat milk production. 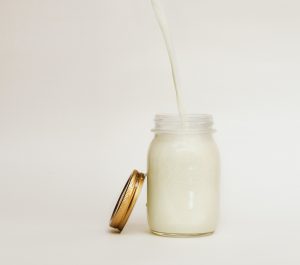 Coconut milk is a rich, creamy milk from the heart of the coconut. People usually buy it in place of, well, cream.  Coconut has a reputation for health and wellness, but it’s not the eco friendly alternative we’ve been seeking.

Coconuts need a lot of water per nut to produce milk.  They also grow only  in tropical climates (think shipping emissions). Additionally, coconut pickers are often paid less than a dollar a day, and the explosion in the popularity of coconut products has led to deforestation of rainforests around the world. Buying fair trade coconut milk can help avoid the labor issues involved in the product, but there’s no denying there’s still a cost to the ecosystem in farming this tropical fruit.

Another well known milk alternative, this ubiquitous grain makes a pretty tasty milk. Rice milk is not known for nutritional benefits, in fact it has the lowest nutritional density out of any of the options we found.

You can get a ton of rice milk per acre compared to all the other dairy alternatives. It comes with a pretty high water price tag (still half the water of almonds) and its production generates the most greenhouse gas emissions of any non dairy milk. 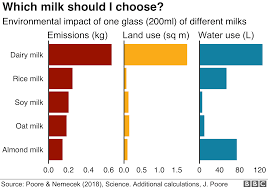 Soy milk was the clear frontrunner before almond milk hit the shelves. It’s the closest you’ll get to the taste of cow’s milk. In terms of protein, soy milk is *ahem* the cream of the crop in comparison to all the other plant-based alternatives. There has been a scare in recent news that soy beans aren’t healthy for women to eat, as they contain certain hormones that are similar to ours. Further research has revealed that in order to reach dangerous hormone levels, you’d have to drink an impossible amount of soy milk.

Because soy is a legume, it can be grown in many places all over the world. While soy’s general usefulness has led to deforestation to make way for soy farms, there are many local farms around the world that will be growing soy you can buy.

In terms of overall sustainability, soy milk is one of the most balanced choices available on the market. It requires the least water out of any milk in our comparison, while being neither the best nor the worst in greenhouse gas emissions. Soy milk does require the most land out of any dairy alternative, but if you’re drinking milk for the protein, this is definitely the choice for you.

Due to novelty, sustainability, and rising popularity of hemp everything, we couldn’t exclude it in our dairy conversation. Hemp milk has been available for years, but only recently did legislation make it legal to grow in America. Perhaps we’re poised for an explosion of hemp milk (like many other hemp products).

Hemp contains a good amount of protein and healthy fats, making their “milk” more nutritious than a lot of our options. Hemp is known for its sustainability benefits, but trustworthy comparisons between non dairy alternatives and hemp milk aren’t yet available. The crop itself uses more water than oat and soy plants, but many times less than almond.  While we can be sure the plant is a strong option, we’d shy away from going all hemp milk all the time, at least until we know a little more about it. 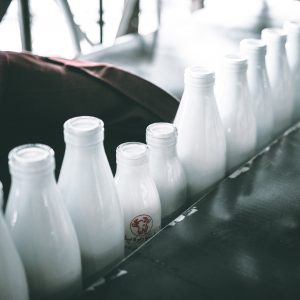 What Milk Alternative is the Most Eco Friendly?

As noted, there are many considerations related to the sustainability of non dairy milk substitutes. Among them, carbon emissions, land use, water use, likelihood of pesticides, and ecosystem damage might help you choose your next cookie dunker.

While no milk alternative aces all categories, depending on your needs, and what’s available locally, you can find the best non dairy beverage for you. ToDey, we’ve given up almond milk, maybe tomorrow we’ll find a local hemp farmer.

Degradable, Biodegradable, Compostable - what's the difference?
The Best Eco Friendly Yoga Mats
6 Phase Homotoxicology Table: The Process of All Diseases
How to Make Your Tea Cup a Little Greener